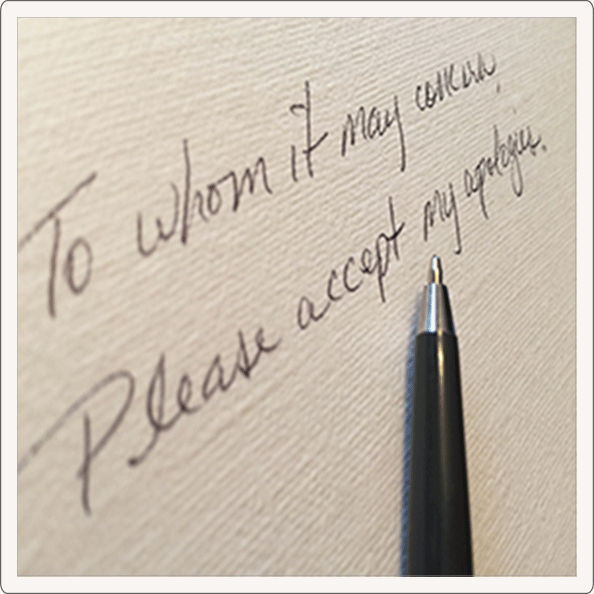 A letter of apology:

First, to the generation of teens and children that follows mine:

On behalf of my generation, I apologize. I apologize for what we’ve done to the institutions of marriage and family, and for the heartache that it has caused your generation.  Too many parents in my generation have refused to deny themselves and learn to take up their cross for their marriage. Instead, they’ve left those crosses for you to pick up and carry for them. You deserved better from us than that, and I am sorry we failed you so miserably.

To the World War II generation:

On behalf of my generation, I apologize. On the back of your commitment and sacrifice, you built a strong country that, in the lap of my generation’s haphazard selfishness, we have almost destroyed. You deserved better from us than that, and I am deeply sorry.

To the Creator of marriage and family:

On behalf of my generation, I apologize. You are clear when You say in Your Word You hate divorce, and yet my generation lives as though that were no longer true. However, seeing the destruction when divorce has ravaged our culture must only make You hate it more. When children must move from one parent’s house to another to make the lives of grown-ups easier, it must sicken You. When kids no longer call any place “home,” but rather “Mom’s house” or “Dad’s house” it must break Your heart. When a culture shifts from parents having many kids to kids having many parents, it must be an abomination to You.

For too long, the generation of our children has had to carry the burden of not saying anything to their parents for fear that it will make one or the both of them hurt or angry. For too long,  their generation has been used as a pawn in courtroom battles and home front wars. Do they not deserve to feel safe? If not in their home with their family, then where?

For too long, the generation of our seniors has watched with broken hearts as we’ve ripped their legacies apart. Rather than getting to admire what they accomplished with forbearing commitment, they have had to suffer through the site of us tearing down their country one family tree at a time.

And for too long, our Lord has had to watch us treat the institutions He created to illustrate His love, with such irreverence and impudence. The term we use on more divorce decrees, “irreconcilable differences,” is a phrase straight from the pit of hell. Since Christ entered the picture, there is no longer any such thing as “irreconcilable differences.” If a holy God can be reconciled to an unholy people, then a husband can surely be reconciled to his wife.

The truth is, Satan isn’t after our marriages. It’s bigger than that. He isn’t after our legacies, although we’ve sure allowed him to ruin many. Ultimately, he’s after a generation’s belief and hope in God Himself. A recent survey we’ve done among high school and college students shows that while over 90% of students polled state that they still dream of having a lasting marriage, less that 25% of them say they have any hope of those dreams ever coming true. Do you hear that, my generation? Don’t you dare look away. Turn and look at the mess, smell the stench of it, because here’s the painful truth.

WE have led a generation to lose faith in lasting love.

So when people ask my wife and I why we do what we do, this is why. Our children’s generation doesn’t have a voice to shout out their pain, so we will be their voice. Our generation of veterans is too heartbroken to say anything, so we will say it for them. Our God, however, needs nobody to speak for Him. He will speak, and it will be heard. So to our generation, please, please, may we humble ourselves and cry out for the healing of this land. Not because of us, but in spite of us.